It have been almost 2 weeks since I came back from one of the most exciting trips I have done in my life, and it´s time to write down how it was before the time starts to erase the details that are still fresh in my mind.

It was a very expected travel, for me, my parents, my brother, my dearest friends and family and others. It was two and a half years without meet with them, since I came to Sweden, for different reasons I couldn’t travel before to visit my homeland Colombia, but now it was the time after a lot of life went on here. I knew I have changed a lot since I left and I wasn’t sure how much my city, my country and my people have changed, it was a big expectation to see my roots from the eyes of a new person.

The trip, I can say started the night before. After hanging out with some friends, I had to do the laundry, clean up my place, and make the bag, checking with my list done during the last months to don’t forget anything I wanted to bring and show there. However I arrived late home so I was running to set the laundry and in the hurry it happened that the keys got locked inside the laundry room, and me outside my flat, and the copy of the key inside the flat, so great! I had to stay for a couple of hours more with my Spanish neighbor Fernando, and he booked the next time in the same laundry room, so after midnight I could enter and recover my keys and continue with the laundry. Meanwhile the clothes were there I started cleaning the pile of dishes,  and the kitchen, I couldn’t do the bag yet as the clothes were still drying, once that was done, I did everything, everything cleaned, clean myself and went to bed around 3.30am having the plane next morning at 8.50, my sleeping schedule was already a mess.

The flight by Lufthansa was in the way  Göteborg-Frankfurt-Bogotá, it was quite normal, good service, nothing fancy, good German beer. In the Frankfurt airport I started to recognized the patterns of the Colombian people trying to get places in front of the line, if that could be called a line, boarding the plane without any order, at the first call for handicapped people everybody was ready in the “line” doing that some woman with a baby in arms had to wait until all these people went in, set the luggage and sit so she can reach her place. Was interesting to see many tourists planning to spend their eastern holidays in my country.  That was an eternal flight crossing the continent, despite the night before, I got very few sleep. I watched about 3 movies, I was standing in the hall for about an hour,  and finally the sun was setting down, what it means I was getting closer to the destination, I got really excited feeling close the moment to see my family. Landed, immigration, picked up the bag, I saw my father through the windows waiting outside, I just had the x-rays left and there I was, going out to the city where I was born.

I met my parents, my brother and my aunt, it was very emotive. It was just happiness. We crossed the whole city towards my parents home in my brother’s new old VW Beatle. Bogotá looked a bit different, but not so much, it was warm, never before in my life I felt the weather of Bogotá as good as those days, it’s warm and it’s amazing to have palm trees at 2600 meters altitude and in the middle of smoke, buses and pollution. The nature is strong there. That night I had my favorite dish Ajiaco, a soup made of 3 kinds of potatoes and chicken. I met my cat, and my parents one, they took a time to recognized me but it wasn’t that hard.. at then 2 years and half is not that much.. and so passed the first night.

Waking up at 4.00 am due to the jetlag, it fit quite well to watch the F1 qualy,  and with a long day ahead I had to take a very good breakfast, “envueltos”. Later we went to the market and I got a bunch of fruits, specially lulo, and granadilla. Those small pleasures that makes the life happy, it was taste of gods.  Not so many exciting things during the day more than go to the doctor and suffer her treatments, take the vaccination against yellow fever. A normal but tasty lunch at home, a Swedish movie (Fucking Åmål) with my mother and dinner at a wok restaurant celebrating  the 33th anniversary of my parents. Feeling really tired I got sleep as a stone, but anyway next morning I woke up early again, that morning the breakfast was called Tamal, and it was the day I would start to meet with other relatives out of my family, I invited for a lunch at my parents place to some of my closest relatives, my aunt, my cousin with her family, including her daughter from who I am godfather, sadly I have been away almost all her life. There were also invited my uncle and my friend…   The lunch was called “frijolada” , another of my favorite dishes.  I gave away some of the present I brought and I shared the traditional Swedish salted goodies, not very well accepted for the sweet palate of the average Colombian.   The night was for the paternal family at the main house of their family, there I met with other aunts, uncle, cousin, and grandmas, Again some tasty dinner, and more natural juices! In this house the Swedish goodies were a little more successful. Back at home, to sleep. 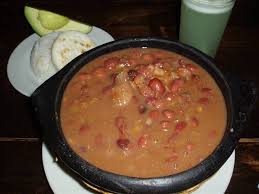 The weekend was over, next day would be a working day, the city would wake up early, and everyone would continue their lives as everyday, everyone but me. So, it was the day I would face again the monster city of Bogotá by my own again, some boring issues in the morning at banks, a nice walk under the sun that suddenly became tropical rainy storm, and I got 100% wet, but I enjoyed, the rain was warm! I took lunch with my friend Hermann who left Sweden almost a year ago, a traditional restaurant of Colombian food, I visited a handcrafts fair another boring staff.. dentist later a spontaneous cocktail in one of the places I most like with the best company I could have, I had planned to start my road trip that night, but due to the spontaneity worth it to postpone the departure until the next morning, first chapter in Bogotá was ended with a high point of emotions, I should also recognized during these days was hard to be there, the city and the way of life is so stressful and noisy, I was really missing to have a silent moment, why was people screaming and running all the time? Was I like them before? I didn’t feel at home, I felt I had not home at all, not there, not here, nowhere. The traffic in Bogotá is chaotic, much worse than 3 years ago, the half of the city is under construction, but there were still the same holes on the streets that I remembered from I was there, and I am afraid some of the constructions have been going on for years, there is no mobility at peak hours, and is really unhealthy to be on the traffic, I felt sick many times because of this and the noise.. people is warm but under this conditions everyone get a bad looking and an unkind behavior. So next day would be the day to start the road tripping “por la carretera”…