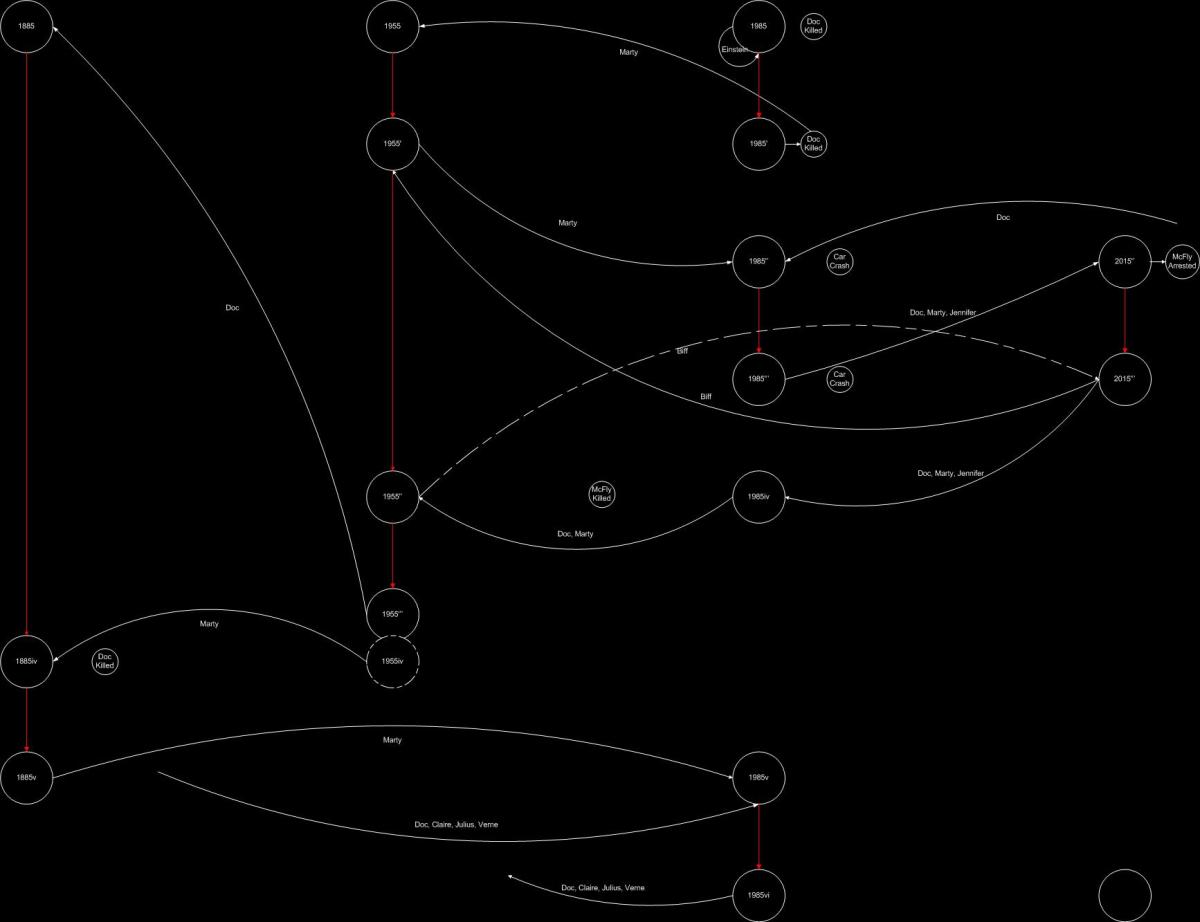 Back to the future is my favourite movie, I don’t know how many times I have watched it and I try to solve some time travel paradox involved in the movie. In my last effort to solve them I have built a diagram with the different realities created, the time travels and the time lines of the 3 movies together. I have followed some rules: 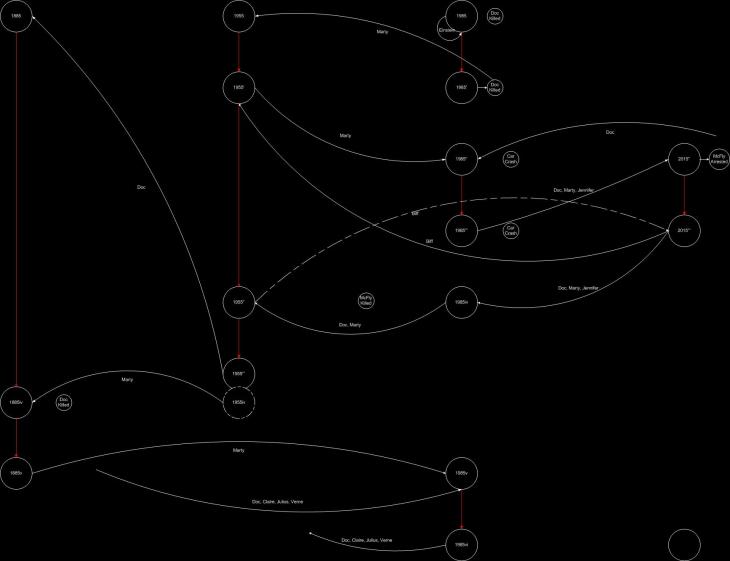 1. Every time travel will create an alternate reality in the destination time

2. Every time travel should move in the same timeline, either forward or backward.

3. The time travels are labeled with the names of the characters that traveled.

4. the red lines shows and alternate reality due to the arriving of a extratemporal character to the relative present. Alternate because the normal would be if time travels were not possible.

under those conditions we can summarize the movie as follows:

A first time travel was made by Einsteins (Doc’s dog) the time line 1 minute ahead of present was created (1985′), with almost no influence in the events, i.e. probably in the original time line the Doc would be also killed by the terrorist. The Einstein from the past didn’t have any information either any way to avoid this happening. After the Doc is killed, Marty escaping from the terrorist travels 30 years to the past, where he changed a lot the previous successes of his life, knowing his young parents. Thanks to the picture of this brother and sister, and with the help of the 1955 Doc and the information of the storm he managed to come back to a 1985» in this new 1985 his family is different, His father is a writer, he has a nice car, etc. and Biff is their employed. A change due to the encourage that his new father got when he hit biff in his face. Somehow they recognize him as his brother and son, I wonder how was the day before he came back to the 1985», where was Marty?, and after he came back, where did that other Marty go? so the answer to this is that in that timeline Marty also met Doc, and travel to the past. The doc is wise enough to don’t affect his career and be the same scientist as he was in the original timeline. Also he knew how to keep the track of the time so he will meet Marty and make him travel to the past and keep the universe safe from a time paradox which could cause a chain reaction that would unravel the very fabric of the space-time continuum, and destroy the entire universe!. he just changed by taking precaution of the murderers., thanks to a letter that Marty left him in the 1955′.

After this, the Doc of 1985» made several travels, according to his suitcase full of bills from different times, and from somewhere in the future, after the events of 2015» he come back to 1985». Again we have to trust in the very careful behaviour of the Doc in his travels to the past to be able to come back to a 2015» and a 1985» that matches with the reality where Marty is. The Doc then, takes Marty and Jennifer from a 1985»’ just created with very or no influence to a 2015» where the son of Marty went to jail creating a new 2015»’ to avoid that. However Biff overhearing the conversation between Marty and the Doc about the risks of the information in the Sports Almanac bought by Marty and related the DeLorean to the one he saw in 1985» follows them and steal the time machine to travel to 1955′, where Marty is struggling to come back to 1985′ and gives himself the sport almanac changing the whole curse of the timeline, now 1955». Biff came back to 2015»’ and leaves the time machine in the place from where it was stolen. Heres is one of the first paradox, Biff coming back from a new 1955» should reach a different 2015»’ where he should be rich and wealthy, no tot he same 2015»’ where Marty and the Doc are rescuing Jennifer from the 2015»’ McFly house. Jennifer and Marty know about the tragic accident that occurred to Marty in that timeline in the 1985»’. However after coming back to 1985»’ they appear instead in 1985iv the timeline generated from 1955» after 2015»’Biffs trip. in 1985iv Biff is a rich man due to his bets in sports, George McFly was killed years before in 1973. The city is violent and unsafe. The Doc aware of what happened took Marty back to 1955» creating a new 1955»’ where they take the almanac from biff restoring the reality they wanted, but the night of the storm when they planned to come back to a «restored» 1985 the flying DeLorean is struck by a light and sent back to 1885, for convenience, creating a 1885iv, minutes after it a postman delivers a 70 years old letter sent by the doc alive in 1885 and Marty looks again for the 1955 Doc, now the 1955»’Doc. Here is the 2nd Paradox, in the timeline where Marty is (1955»’), there is no Doc in 1885 who could have sent a letter. It could have happened in a hypothetical 1955iv, some how Marty went through a wormhole during the storm and appear in another reality to receive the letter.

Now, Marty with the 1955iv Doc look for the DeLorean hidden since 1885 in a cave and also discover that  the 1885iv Doc was killed. Marty decided to go back to 1885iv, creating an 1885v where he avoids the Docs killing and agreed with him to come back to 1985.  The day of the time travel, the Doc already in love with Claire, helped Marty to go back to 1985, now 1985v where the time machine is destroyed by a train. Again we supposed the history went smooth so it will exist a McFly family, a Jennifer, etc. the new 1985v is very similar, to the 1985»’, Marty avoids his car accident changing the story of the known 2015» and 2015», in other words there was no need to avoid Mcfly’s son arrest it was probably enough to avoid the car accident. The doc some years after in the 19th century decides to visit Marty arriving to 1985v in company of Claire and their 2 sons Julius and Verne, also Einstein is with them. He has built a new time machine from a locomotive, and the last dialog suggest that after traveling in the future they decided to settle down somewhen in the past.

After this explanation the most influence character in the series is the Doc, great scott! in his several time travels he managed to keep the equilibrium of the universe and the realities, even cheating a bit in 1885»’. As he explained the future is not written but it certainly is determined by present and past events, at the end Marty and Jennifer’s future is unknown but promising, Marty probably following a career as guitarist and head of a happy family.

Nonetheless, I still enjoy a lot watching these films, if any of you has a better explanation of the successes here explained is very welcome. to share them!